Our own Rhonda Moniz is the underwater forensics investigator on the third episode highlighting the cold case in Boston. Retired NYPD detectives investigate the Smiley Face murder theory talk to the mother of Will Hurley, a navy veteran who was found dead in the Charles River in 2009.

If you would like to see the show, but don’t have cable television here are some alternate options for viewing: 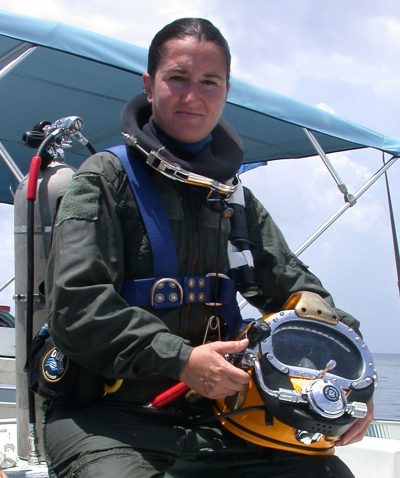 Rhonda Moniz is an Underwater Forensics Specialist and ROV Pilot/Supervisor. Ms. Moniz is also a Diving Safety Officer, and specializes in the use of Marine Technology in Underwater Search and Recovery, and Aquatic Crime Scene Investigation. She has also worked over the past twenty years, as a lead Science Diver and Diving Instructor. Ms. Moniz is founder and Director of Operations for Underwater Investigative Group, a company specializing in underwater forensics, and marine technology. She has been involved in a number of expeditions around the globe including several as ROV Pilot and Engineer for Dr. Robert Ballard who discovered the Titanic. She has also worked with the US Navy and United States Coast Guard.

Ms. Moniz is chairman of the board for the New England chapter of the Marine Technology Society as well as President for the Marine Oceanographic Technology Network. She has lectured around the country. Ms. Moniz is a published author and has acted as a subject matter expert for a number of television productions.

Ms. Moniz teaches Underwater Forensics and works with her team to provide UCSI seminars for Police, Fire, and Homeland Security personnel. She also gives talks and seminars around the country that are open to the public. She has worked as a Dive Instructor and has attained Master Instructor Rating. She is currently co-authoring a book with Dr. Elizabeth Laposata former Medical Examiner for the State of Rhode Island.