Oceans ’15 in Washington, D.C. occurred 20-22 October.  It exhibited over 200 companies with corresponding technologies, informative technical sessions, panels, and town hall sessions, as well as planned and orchestrated fabulous networking sessions.  From the first event, the “Icebreaker Reception,” MOTN was able to make/renew fantastic connections, such as Susan Avery of WHOI; Theresa Baus of NUWC (more on NUAC below); and  Garrett Kuska and Vembu Subramanian, the Regional Coastal Ocean Observing System Managers for the MARACOOS (Mid-Atlantic Coastal Ocean Observing Regional System) and SECOORA (Southeast Coastal Ocean Observing Regional Association) (SECOORA).  MARACOOS and SECOORA works closely with NERACOOS; we initiated a well-received conversation about facilitating a relationship similar to what we have with NERACOOS and to keep the channels of communication open to foster new business connections. 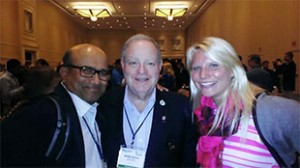 MOTN was able to talk to every New England based exhibitor as well as many others, explaining the numerous benefits and opportunities that flow from a MOTN Membership.   We had several companies join/renew while we were at Oceans, arguably due to the energizing effect of meeting in person.  MOTN also was able to secure multiple potential new member companies to share in the benefits of MOTN membership.  MOTN made countless business connections and was able to facilitate several tangible working relationships among member companies.

MOTN also had the opportunity to attend a number of technical sessions and panels/town halls that centered on the Blue Economy as well as Challenges in the Arctic.

MOTN President, Harlan Doliner, was a panelist in the Blue Technology/ Blue Economy Town Hall session where he explained the importance of industry associations, like MOTN and how they foster business opportunities in conventional as well as unconventional ways.  He also spoke regarding the expansion of our industry and the need to not box-in the industry to fit a certain definition, but to keep all channels open to all markets for innovative business opportunities, including cross-overs to maritime security and the life sciences.

Directly after the Town Hall discussion, and through-out the conference, several important attendees from government agencies, academia, and the private sector approached Harlan Doliner or me about the importance of getting involved with MOTN.  This was very encouraging and exciting to be able to spread the importance of MOTN and its industry presence.

MOTN attendees at Oceans ’15 included board members Steve Withrow (Trinity International Consultants), Chris Casagrande (Sea Sciences, Inc.), Rhonda Moniz (Teledyne SeaBotix), Harlan Doliner as well as Maggie Merrill (Marine Marketing Services) and yours truly*.  We all took advantage of the networking opportunities presented by the conference and put into practice one of the principles of MOTN: making many connections through networking and meeting people engaged in business that could potentially match well with one or more of our member companies.

Overall, the conference was a complete success for MOTN attendees in terms of gaining new members, fostering new and old business relationships, as well as gathering updates regarding our industry and the governmental and academic institutions with which we work.  MOTN looks forward to working with all those with whom we made new or renewed connections.

MOTN is moving forward with events in December, and the coming year, including a major event at the ATMC in Fall River on December 2nd, which will be focused on Maritime Innovation: Connecting, Training & Advancing.  Mark your calendars – details coming soon!  As always, feel free to contact me at info@motn.org.

*Apologies to anyone inadvertently omitted.