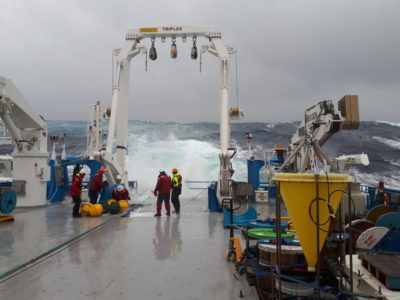 (Falmouth, MA) – McLane Sediment Traps in a remote Southern Ocean observatory are among the instruments that have obtained the longest known Southern Ocean time series samples ever collected.

The two deep water moorings, Southern Ocean Flux Station (SOFS) and Sub-Antarctic Zone sediment trap (SAZ) collect samples and data for studies of Subantarctic waters where conditions are so extreme, processes are the most intense and least studied.

Dr Elizabeth Shadwick who leads the SOTS sub-Facility and is a senior Research Scientist at Commonwealth Scientific and Industrial Research Organisation in Australia, (CSIRO) was the Chief Scientist on the September 2020 SOFS and SAZ recovery voyage onboard CSIRO’s RV Investigator. “We have sustained the longest time series of Southern Ocean observations operated by any nation, contributing to the global effort to understand ocean dynamics and their role in climate and responses to anthropogenic emissions,” she noted.

The Sediment Traps and other instruments were deployed as scheduled in 2019 by Integrated Marine Observing System (IMOS) Australia.  When the pandemic delayed 2020 mooring recovery, the instruments remained on station for 16 months and two harsh winter seasons; longer than intended.

The extra-long data time-series will greatly contribute towards studies of the total global ocean uptake of human-induced CO2 emissions. The moorings were re-deployed during the 2020 recovery voyage and an April 2021 recovery is planned.