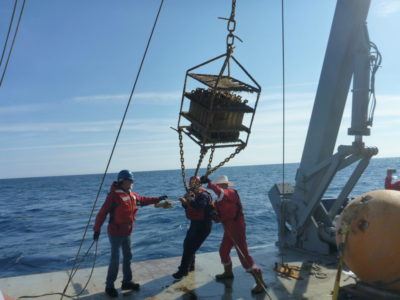 Prof. Stuart Cunningham, Scottish Association of Marine Science (SAMS), is among the principal investigators conducting Atlantic deployments on OSNAP mooring arrays. OSNAP has developed a multi-decadal observing system where a few critical in-situ observations from instruments such as the RAS-500, coupled with satellite observations and an Argo float array, will provide a reliable and sustainable measure of the AMOC for decades to come.

Prof. Cunningham conducts nutrient and carbon concentration analysis from in-situ samples, using a RAS-500 obtained through project ATLAS (A Trans-AtLantic Assessment and deep-water ecosystem-based Spatial management plan for Europe). Combining these measurements with measurements of the North Atlantic circulation indicates how the North Atlantic biogeochemistry works and helps researchers understand the role of the Atlantic in absorbing anthropogenic carbon.

McLane instruments have been deployed worldwide in some of the most remote oceans on earth. Products are delivered worldwide both directly and through international sales representatives.

Learn more about the RAS-500 and other McLane instruments at http://www.mclanelabs.com